Esther asks about improving rail links from Knutsford to Manchester 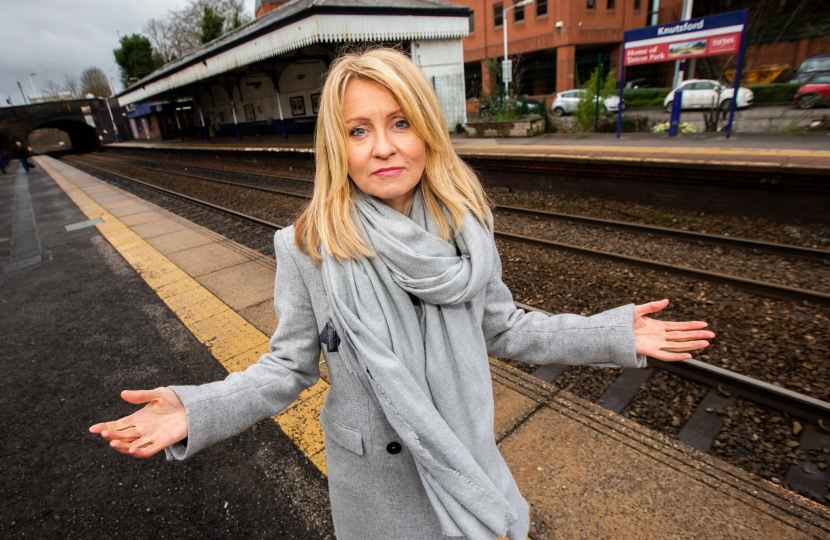 AN MP has demanded government step in to ensure plans for two trains an hour on the Mid Cheshire line to Manchester gets back on track.

Tatton MP Esther McVey said it was “completely unacceptable” the trains promised have been repeatedly delayed, and in the Commons urged Transport Ministers to act.

Speaking in Parliament during Transport Questions she said: “Commuters have been repeatedly promised an upgrade to the Knutsford to Manchester line to two an hour, however, after excuses procrastinations that is now not happening at the time it is meant to happen.

“It is unacceptable to have such an unreliable and irregular service for this busy part of the country.”

Ms McVey urged Transport Ministers to intervene and speak with North and Network Rail and “get this promise fulfilled.”

Rail Minister Andrew Jones said: “I entirely agree that we want to see reliable services offering high capacity and she speaks well on behalf of her constituency and of course I will look into the matter and get back to her.”

After Northern won the Mid Cheshire Line franchise bid in 2015 it promised the extra train an hour, which was due to begin in December 2017.

Ms McVey added: “We are in a situation where we do not know when we will get the promised two trains an hour and something needs to be done. A report out in October seemed to suggest that the extra service would only run between Chester and Altrincham. It is not acceptable and I hope Andrew Jones looks into the matter quickly and has some answers.”

Transport Secretary Grant Shapps on building a railway fit for the future.