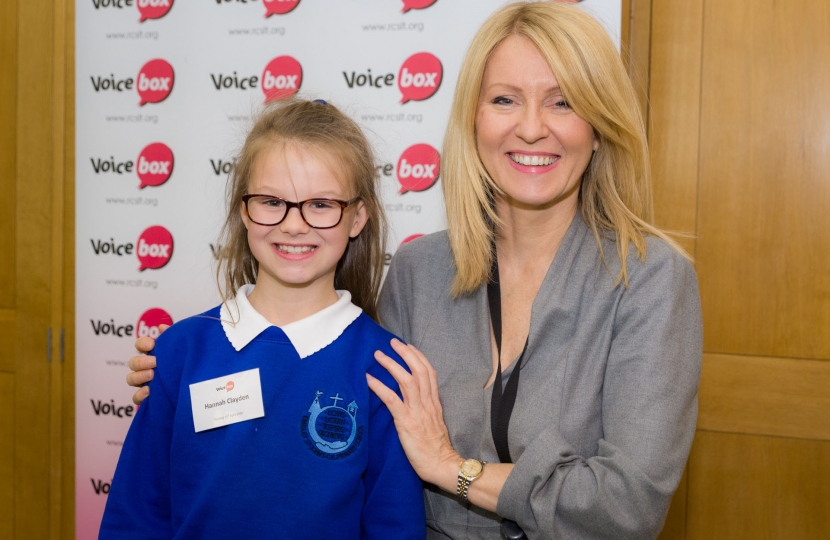 Since last autumn, over 5,000 children have taken part in Voice Box – the joke-telling competition for schools in England and Scotland. Eighteen made it through to the final at Portcullis House, Westminster in London on 30 April 2019, with Nick Smith MP acting as Master of Ceremonies. Two of them were local schoolgirl Hannah Clayden from Kingsley, and schoolboy Tyler Carr from Winsford.

The other day I sat on a hair dryer.

That put the wind up me!

Tyler, age 8, who attends Oak View Academy, also had the crowd in stiches with his joke:

What do you call two robbers?

A pair of knickers!

Hannah and Tyler were each presented with a Voice Box certificate and goodie bag for making it through to the final.

Voice Box is an annual competition, organised by the Royal College of Speech and Language Therapists (RCSLT) and partnered by National Association of Head Teachers. It aims to remind people that there are children in every classroom who need support to help them speak and understand what is being said to them.

More than 10% of children and young people have long term speech, language and communication needs which create barriers to communication or learning in everyday life. This includes 7.6% of children who start school with developmental language disorder – a condition where children have problems understanding or using spoken language, with no obvious reason for these difficulties – and 2.3% who have difficulties associated with another condition, such as autism or hearing impairment.

Supporting Hannah at the Voice Box final was Esther McVey, MP for Tatton, whose constituency she lives in. She said: “Everyone needs a joke to share some happiness and put a smile on a face – Hannah’s joke did just that.”

Antoinette Sandbach, MP for Eddisbury, who also attended the event, commented: “I am delighted to support Tyler Carr at Voice Box. It has shown me how critical communication skills are in determining a child’s life chances. As a politician, speaking and listening is a vital part of my life and I really value the work done by teachers and speech and language therapists to enable others, including children, to communicate more easily.”

RCSLT Chief Executive Officer Kamini Gadhok MBE added: “In every classroom there will be between two and three children with communication difficulties. The Voice Box competition helps teachers, children and parents to focus on the impact effective communication can have on a child’s social and emotional well-being.”

Update from the Prime Minister on our fight against the coronavirus

The Prime Minister's speech on 28th May 2020, about the country's fight against coronavirus